UFA is a high performance youth football academy focusing on developing players from the age of 6 to 17.

Our vision is to develop skills, passion, and love for the sport, through healthy practices, and programs inspired by and modelled on Europe’s biggest football clubs. Development of young players is the highest priority at Ultra Football Academy. The academy’s greatest goal is to develop young, technical footballers, so that they can play at the elite level. UFA development aside from player’s sporting ability, aims to include academic education and growth of champion’s character in all assigned tasks. We genuinely believe that the next generation of football stars must have a champion attitude both on and off the field to succeed. 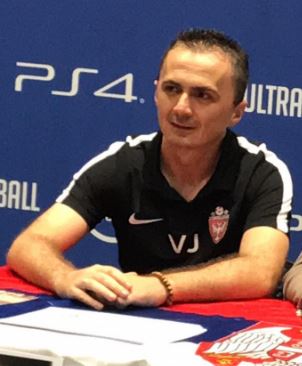 Vic is a talented and elite coach who is passionate about development of the future stars of the game.

Our sessions are well planned, longer and we practice active coaching before, during and after the game. Over the past decade, speed, agility, and coordination (SAC) training has become an important component in the development of elite football players. At all levels – youth, amateur, and professional SAC training helps players develop or refine key physical abilities. We have recognised the importance of this, and all our sessions include SAC component. For that reason, our players have advanced balance, acceleration and overall speed, along with great technical abilities.
Ultra-Football Academy teaches the following values: respect, fair play, responsibility, trust, teamwork.

Anybody can kick a ball around, to us it is so important the way we play.

Academy teams compete during summer season and at the elite tournaments (5 to 9 a side).

Our mission is to develop champions and leaders of tomorrow.

It’s one of the fastest growing sports and it is played in over 100 countries with millions of players around the world. The game encourages skillful and creative play whilst emphasising ball retention. As a small-sided game, players are constantly placed in situations where they must receive or play whilst under pressure or in confined spaces and it places considerable demand on technique, movement, tactical awareness and fitness. Playing Futsal it allows player to touch the ball nearly 12 times more than playing football. The best technical players come from Futsal.